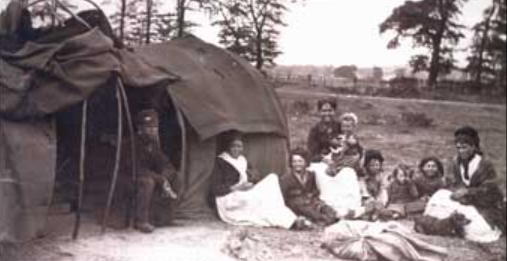 June is Gypsy, Roma and Traveller History Month (#GRTHM2021). Over the month STAG will be posting links to various webpages, videos and photos on our social media and website to illustrate the rich history and culture of Gypsies, Roma and Travellers. We’d like to hear whether you learned something new or have your own stories and pictures to share.

This week we are sharing:

Searching for the Traveller People – A film looking at the heritage of Scottish & English Gypsies and Irish Travellers with Damien La Bas working with them to write a new song for Travelling people. If you like Ewan MacColl and Peggy Seegar, this shows the Gypsy, Roma and Traveller connection to their folk music tradition.

The History of Travellers in Kent – Read about how Travellers were an essential part of Kent’s local agricultural workforce, their connection with local fairs and their traditional stopping places in London over the winter months.

Top 10 films about Gypsies & Travellers – How many on this British Film Institute list of TV shows and films celebrating Gypsy, Roma and Traveller communities have you seen?

The Great Gonzo – Maud Rhoda O’Brien, who was also known as the electric lady, was a sword swallower, female wrestler and simply an amazing lady. As well as being an Irish Traveller.

Travellers Remember – A collection of video stories compiled by Traveller Times. Who says that a Traveller woman can’t join the RAF and then train to become a nurse? Even in the 1970s.

Friends, Families & Travellers have prepared a range of resources to help you get involved in this year’s GRTHM, with activities targeted at schools, local authorities, health providers and the general public. You can download their language cards, poster timeline of significant dates in history for Gypsies, Roma and Travellers and the #MakeSomeSpace Selfie photocard.

On the 9th June the Traveller Movement and ReneCassin are also holding a “Making GRT history present” online event. This is an evening webinar to celebrate GRTHM where GRT activists and supporters can get together to discuss how to build a successful coalition.

#MakeSomeSpace to get involved and tell us what you’ve learned over GRTHM or share your own stories. We’ll have more news about the London-wide GRTHM online event on 24th June and our own local Exhibition in July later on in the month. Watch this space for more information.